Less than 20% of patients diagnosed with pancreatic cancer have operable disease and a majority of them have either locally advanced or metastatic disease with a median survival of less than 3–6 months.[1]

In the National Comprehensive Cancer Network (NCCN) Practice Guidelines, gemcitabine monotherapy is recommended treatment for advanced pancreatic cancer in patients with poor performance status.[7] S-1 monotherapy (median survival of 9.7 months) was shown to be non-inferior to gemcitabine alone (median survival of 8.8 months) with HR of 0.96; 95% CI 0.78 to 1.18 in a phase III study conducted in Japan and Taiwan.[8] Complete response to monotherapy S-1 in this context has also been reported. [9]

Our patient who is a 68-year-old ethnic Chinese woman had a prior history of intraductal papillary mucinous neoplasm (IPMN) manifesting as an 8 mm cystic side branch communicating with the main duct in the body and 4 mm cystic lesion in the uncinate process of the pancreas. These were detected incidentally on CT urogram when she presented with a complicated urinary tract infection in 2013. She has no other significant medical history of note. The IPMN was documented to be stable based on MRI after 1 year and in subsequent biennial MRI scan of the pancreas from 2013 to 2018.

She started experiencing abdominal discomfort in mid-2020. MRI scan done a month after onset of abdominal pain revealed a mass in the head of pancreas measuring 2.5 cm by 2.1 cm encasing both the superior mesenteric artery and vein. It had also compressed on the common bile duct causing biliary drainage obstruction and the tumour had invaded the third part of the duodenum. The radiological features of multiple liver nodules in segments 6, 7 and 8 were consistent with metastatic disease. The diagnosis of adenocarcinoma of the pancreas was confirmed by ultrasound guided biopsy of the segment 6 liver metastasis.

She started treatment with chemotherapy combination capecitabine/oxaliplatin (CAPOX)[11] in view of her poor performance status. Her performance status was ECOG 2 at presentation. After two cycles of CAPOX, she deteriorated further with severe loss of appetite, abdominal pain and rapid loss of weight of 10 kg within 1 month. Progressive disease was then documented on CT imaging.

The tumour specimen obtained from the biopsy of the liver metastasis was sent for comprehensive tumour genetic profiling. When she was admitted to hospital for intravenous hydration and sodium repletion, her performance status was ECOG 4. Her inability to retain sufficient enteral nutrition as a result of the progressive duodenal obstruction from tumour invasion resulted in grade 3 hyponatraemia (serum sodium=120 mmol/L).

Tumour profiling detected an FGFR2-TACC2 fusion in the tumour specimen and oral erdafitinib 5 mg per day was started on knowledge of the profiling result. The specific FGFR2-TACC2 (NM_000141)-TACC2(NM_006997) fusion was at (F17; T7). We postulated that this fusion may be associated with a clinical response to FGFR inhibitors such as erdafitinib. There was complete resolution of nausea and abdominal pain within 3 days of starting erdafitinib. She was discharged well and walked out of hospital without assistance after 1 week of treatment using erdafitinib. 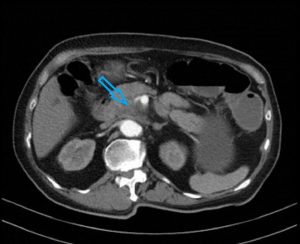 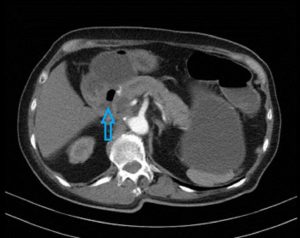 Tumour marker CA (carbohydrate antigen) 19–9 increased from baseline of 2139 U/mL (normal range 0–37 U/mL) to 5516.3 U/mL after second cycle of CAPOX. Two weeks after initiation of erdafitinib, CA 19–9 dropped rapidly to 79.3 U/mL and then normalised with a value of 36.7 U/mL a month later. CA 19–9 continued to remain normal at 10 months after initiation of erdafitinib treatment. 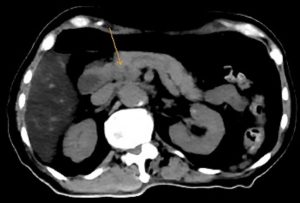 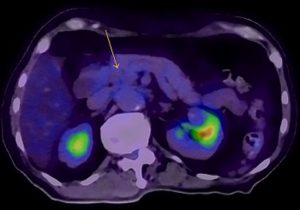 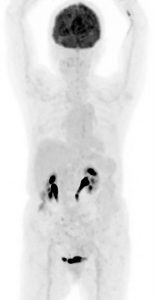 Erdafitinib is a potent tyrosine kinase inhibitor of FGFR1–4. The drug has shown antitumour activity in preclinical models of different solid tumours,[12] and in a phase 1 study involving patients with urothelial carcinoma and other tumour types with FGFR alterations.[13] It is US Food Drug Administration approved for the treatment of patients with advanced or metastatic urothelial carcinoma who have FGFR2 or FGFR3 alterations and have progressed after prior chemotherapy.

In view of the possibility of aggravation of hyponatraemia, nausea and vomiting, our patient was started on a reduced dose of erdafitinib (5 mg per day) compared with what is currently recommended for the initial treatment of advanced urothelial carcinoma (8 mg per day).

The grade 2 diarrhoea encountered at 5 mg of erdafitinib per day resolved with loperamide per oral 4 mg 3–4 times per day and diarrhoea is no longer encountered with the current dose level of 4 mg per day.

Transient central serous retinopathy was diagnosed when our patient had mild visual impairment 1 week after use of erdafitinib. It resolved when the erdafitinib dose level was reduced from 5 mg to 4 mg per day.

Our patient has returned to work and is presently free of symptoms. Performance status is ECOG 0 at present and she has regained her original weight prior to diagnosis of pancreatic carcinoma. She continues to be on erdafitinib at 4 mg per day. Response evaluation CT scan will be performed every 3–4 months.

FGFR2 encodes a tyrosine kinase cell surface receptor which plays an important role in cell differentiation, growth and angiogenesis.[17] Specifically FGFR2 alterations have been found in less than 1% of pancreatic cancers.[17] The FGFR2-TACC2 fusion (F17; T7) detected in our patient’s tumour tissue is structurally similar to other characterised FGFR2 fusions including FGFR2-BICC1, FGFR2-CCDC6, FGFR2-AHCYL1, FGFR2-FRAG1, FGFR2-NOL4 and FGFR2-TACC3.

These fusions have been shown to be activating oncogenes and are sensitive to FGFR inhibitors such as erdafitinib. Furthermore FGFR2 variants with alterations resulting in lack of the cytoplasmic domain encoded by exon 18 have been reported to be oncogenic in vitro,[18] and therefore, the detected FGFR2-TACC2 fusion (F17; T7) in our patient’s tumour is an activating rearrangement.

Erdafitinib is a pan-FGFR1–4 inhibitor. In cholangiocarcinoma, good response is found in those tumours harbouring FGFR2 fusions, while FGFR2 mutations and amplifications seem to confer less sensitivity to erdafitinib.

This was demonstrated in a phase 2a study of erdafitinib in previously treated patients with FGFR-altered advanced cholangiocarcinoma.[19] For those with FGFR2 or FGFR3 fusion positive cholangiocarcinoma, the median PFS was 12.7 months compared with the overall PFS of 5.6 months for the entire study cohort.

A phase 1 study for erdafinitib in solid tumours reported a better response in tumours carrying FGFR mutations or gene fusions compared with the overall cohort, with an overall response rate (ORR) of 21% (19/92) versus 11% (21/187), respectively.[20] The most responsive tumour types in this study were urothelial carcinoma and cholangiocarcinoma, with an ORR of 46% (12/26) and 27% (3/11), respectively, in response-evaluable patients with FGFR mutations or fusions.

In this study, less than half (46%) of the patients reported having an adverse event of grade 3 or higher that was related to erdafitinib. Common events of grade 3 or higher including hyponatraemia (11%), stomatitis (10%), asthenia (7%), central serous retinopathy (3%) and hyperphosphataemia (2%) were reported at the recommended daily dose of 8 mg erdafitinib in the treatment of urothelial cancers.

Our patient did not experience any grade 3 or higher adverse event at 5 mg per day. The central serous retinopathy, grade 2 hyperphosphataemia and diarrhoea resolved with dose reduction to 4 mg of erdafitinib per day.

Pancreatic adenocarcinoma tumours carrying FGFR2 fusions and mutations are not well represented in the published studies. More studies focusing on the efficacy of FGFR inhibitors such as erdafitinib in the treatment of pancreatic cancers with FGFR fusions and mutations especially in those tumours with KRAS wild type status should be done.

Our patient’s comments: ‘I am grateful for this new lease of life after being diagnosed with stage 4 pancreatic cancer and especially what was originally informed to me as a diagnosis with a dismal prognosis of less than 1 year median survival, I am however concerned about the cost of treatment after the drug early access programme ends as I do not have comprehensive health insurance coverage.’

The sponsor has kindly committed to continuing with the access programme in provision of erdafitinib until disease progression for our patient.

As corroborated by established data in other tumour types such as cholangiocarcinoma and urothelial carcinoma, advanced pancreatic cancer harbouring fibroblastic growth factor receptor 2 (FGFR2) altering mutations and fusions may benefit from use of FGFR inhibitors such as erdafitinib.

Profiling of pancreatic adenocarcinoma especially in those with KRAS wild-type status is important to look for actionable mutations and fusions which may be effectively treated using available targeted therapeutic agents especially if the patient is frail and unfit for systemic chemotherapy. 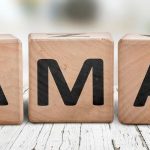 AMA: Ask Me Anything with Dr Donald PoonCancer 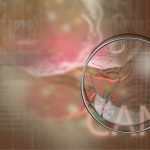 Cancer Screening: What To Expect & How To Do It Right?Cancer